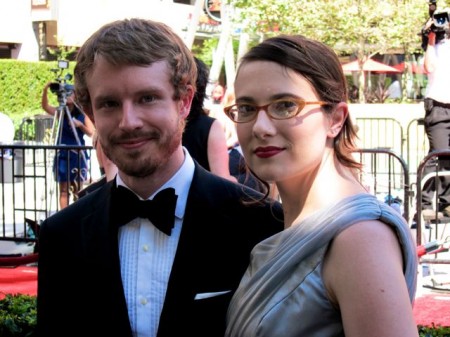 Emmy Day started out bright and early with a trip to see Sara at Primrose Organics—a vegan and eco-friendly salon in Los Filez—to get my hair done. 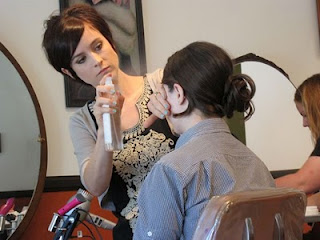 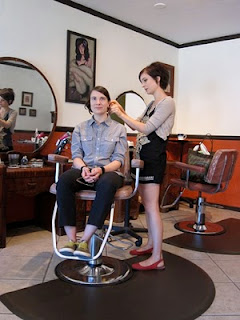 I walked in with no idea what I wanted, and somehow left with exactly what I was looking for. If you’re in LA, I recommend that you go see her immediately. 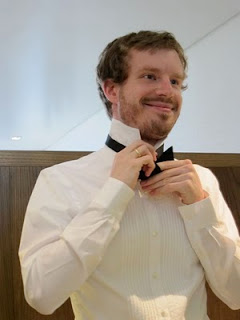 After my hair appointment and a quick lunch, it was time to get fancy, and Jeremy really pulled out all the stops. Your eyes aren’t deceiving you, he really is tying a real bow tie. (You should have seen us trolling the internet a couple of weeks ago for a YouTube video that could actually explain how one worked. We spent an entire Saturday night in our apartment, tying bow ties on each other, trying to get it right!) 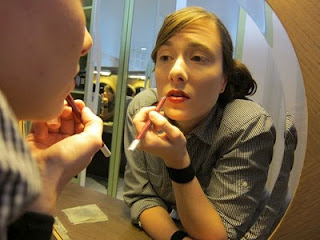 These days, I wear makeup about once a year. However, as a former gothy teenager, I can still wield a mean blush brush when I need to. What I learned from my Emmy makeup experience: never underestimate the the power of Urban Decay vegan lip liner. My lipstick was OMG RED, and it stayed put all night without even a hint of smearing or feathering. 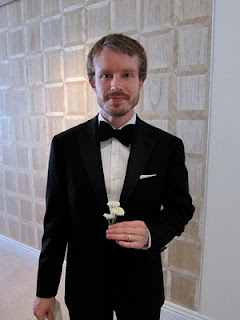 Unsurprisingly, Jeremy looked awesome in his tux. Here he is holding the flowers for my hair while looking incredibly dapper. I think this may be my new favorite photo of him.

Between Jeremy’s bow tie and my makeup, we cut it pretty close, but we somehow finished getting ready just in time to meet our driver and several of Jeremy’s co-workers downstairs. 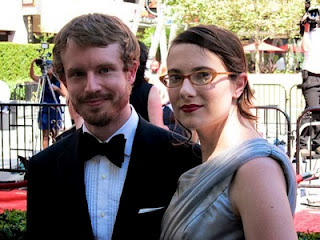 When we got to the Creative Arts Emmys, we stepped of our car and smack onto the red carpet line. Here we are, doing our best impressions of people who know what they’re doing. In the end, we opted to cut our red carpet walk short, and entirely avoided press row. This was probably for the best, as I’m quite sure I would have either tripped and fallen or had a major wardrobe malfunction. Either way, disaster was definitely averted.

We weren’t allowed to take photos inside the awards ceremony, so I don’t have any ridiculous pictures of the set or the presenters. (I’m told that you can see it all on TV this weekend on E!) If you’re curious, Jeremy’s project didn’t end up winning. On the bright side, this means that we don’t need to figure out how to keep our cats from knocking an Emmy off of the mantle. (Velcro? Duct tape?) 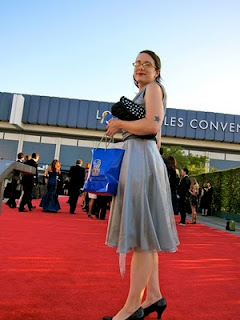 After the awards, we headed to the rooftop bar at the Marriott for a quick drink with other folks from Jeremy’s company. On our way there, my poor feet started threatening revolt—I am, shall we say, unaccustomed to wearing heels—so I insisted that we stop at the Ritz Carlton to see if their spa sold sandals. Fifty-four dollars later, I walked out with a pair of silver plastic flip flops and no regrets. After our drink, we headed out to the Creative Emmy Ball, where I temporarily switched back into my fancy shoes for the second red carpet of the evening. Moments later, much to my surprise, I got to meet everyone’s favorite sassy redhead. 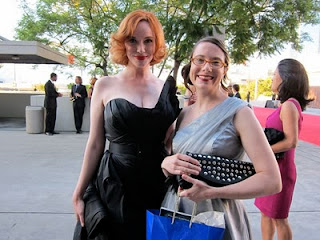 Christina Hendricks was the only celeb whom I actually wanted to meet at this event. As luck would have it, she’s a good pal of one of Jeremy’s co-workers, so we were introduced on the way to into the ball. When I finally managed to ask her for a photo, I was so nervous that I ended up looking pretty deranged. She, on the other hand, was incredibly beautiful and incredibly sweet. Note to self: Don’t talk to/get photographed with famous people when your blood sugar is low. 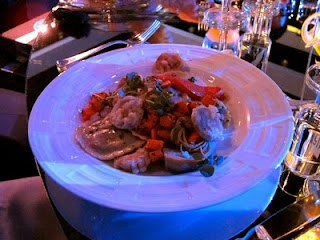 If you’ve been following along, you know that, during the whole trip, I had amazingly good luck with people going above and beyond the call of duty to accommodate my vegan diet. The dinner at the Creative Arts Ball was certainly no different. The caterer checked all of the ingredients in each dish, and the chef offered to make me a special meal so that I could have dinner with everyone else. As it turned out, my dish included the best mushroom vegan ravioli I’d ever eaten. (The caterer is so on my list of people receiving thank-you notes after this trip.) 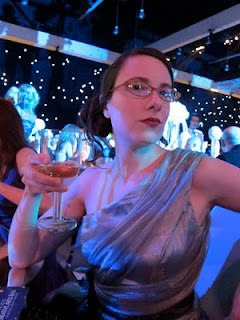 After dinner, the party started. The free booze was flowing, but I kept getting so distracted by what was going on around me that I didn’t manage have more than a glass of wine or two and half a cocktail. (Unrelated, have I mentioned that my vegan Dalia MacPhee evening gown looked totally classy?) 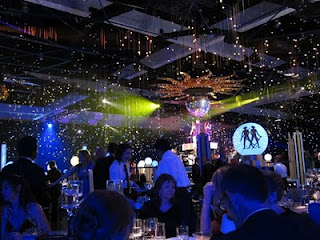 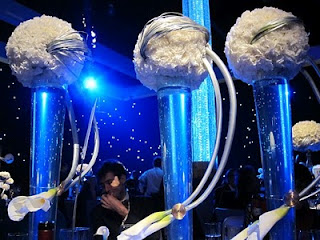 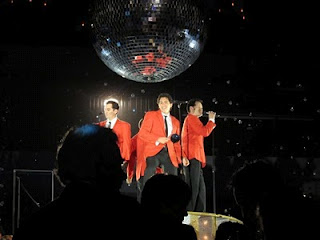 As you can see, the Creative Arts Ball looked like the most ridiculous astrologically-themed prom you could ever imagine. I kid you not, there was actually a Grey Goose bar made completely out of ice in the middle of the room, and a gold lamé sun-shaped disco ball over the stage.

After the ball, we hopped into the limo with Jeremy’s co-workers and headed off to The Standard for the Mad Men after-party. 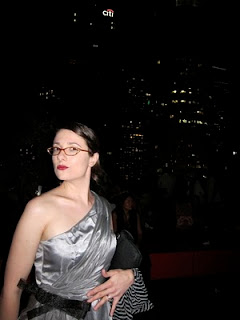 Once there, we received blue armbands that, as far as I could tell, allowed us to get away with pretty much anything. From observing the other guests, “anything” seemed to include endless free drinks, permission to take one’s clothes off and jump into the pool at will, and free reign to go anywhere in the hotel and cause a loud, drunken ruckus. In true Hollywood fashion, I started the party making a sexy face at the camera, and—no thanks to the large tottering woman in impossibly high heels—left with a broken toe. That’s pretty impressive, considering I only managed to have one cocktail. 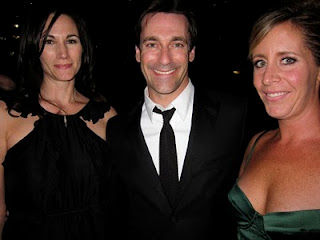 As one would expect of the Mad Men after-party, the Mad Men cast was there. We’d already met Christina Hendricks, but some pals took photos with Jon Hamm, and the actress who plays Peggy Olson fell over Jeremy and scuffed his shoes. (She was very apologetic.) There were also quite a few SNL people there, and I noticed several musicians. Being a big NPR dork who doesn’t have a TV, I was at a bit of a disadvantage as far as celebrity sighting was concerned, but I’m pretty sure that I didn’t end up talking to anyone ridiculously famous without knowing who they were. Now, had Rachel Maddow or Ira Glass been there, you might have seen me go all fan-girl. 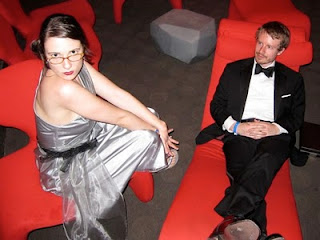 On our way out of the party, we found an empty room full of weird red chairs. Following the blue armband code of “anything goes,” we stopped to pose for a few photos before the car arrived to take us back to the hotel.

Emmy Day or not, we were still in bed before 2am. (What? We were tired! The Emmys started at 3pm!)